My Kilimanjaro Experience - By Phil

Working as a mountain guide takes me all over the world, meeting all sorts of people from different backgrounds and cultures. However, there always seems so much more to explore, do and see and prior to this October, I had not even stepped foot on the African continent yet. An adventure was waiting there and luckily with Challenge Central, an opportunity came to join a group in taking on the highest mountain in Africa, Mount Kilimanjaro. At 5895m above sea level it is also the world's highest free-standing mountain, making it a very popular destination for those wishing to reach the summit for it's No.1 status.

After arriving in Kilimanjaro International Airport in Tanzania, I quickly completed the mandatory forms before going through security. The heat was intense, certainly compared with the current UK weather, and trousers, shoes and fleece became shorts, flip-flops and t-shirt. After arriving at our hotel in Moshi, it was straight to the bar for drink, food and relaxation before the group arrived the next day. Luckily, I had the opportunity to do a one-day safari in the Ngorongoro Park. This was truly a gem of a place to visit, with it's rich surroundings and variety of wildlife. The day was a scorcher, so lions were sleeping under trees and hippos bathing in pools; you quickly learn about the 'Big Five' and the driver was full of info, stories and even singing!

Day 1 of the trek came very fast, and after brief introductions from the group we set off for Machame Gate, our starting point. We were introduce to the local guides, the leader being a kind and friendly man called Sauly who went out of his way for the group throughout the trip; in fact they all did! My 14kg main rucksack was carried by my personal porter, Sammy. After the time it took sorting out formalities and checking through my day sack many times, we all set off on a well-defined path going through forest. The weather was lovely, and being in the shade meant it wasn't too hot and sweaty. The terrain wasn't too difficult and the pace was very slow; or 'Pole Pole' as the guides reiterated throughout the 5-day trek to the summit. Apparently, only 40% of people attempting to reach the summit actually make it. Kilimanjaro can be seen as very doable, 'easy' and non-technical, and with all the celebrities going for it, many more people with little or no mountain experience give it a go, only to be defeated by the high altitude and arctic conditions at the top. This is why you need to allow five days to the summit for acclimatisation.

Day 2 was a route from Machame camp at 2850m to Shira camp at 3810m. A relatively easy walk, however, walking in the heat of the African sun didn't help much. Sun protective lotion definitely came in handy, along with applying after-sun at the end of the day. All our main meals were provided for and breakfast and dinner came out of a small cooking tent at the camp, delivered to our communal tent, where I was not disappointed with the variety of meals provided. There was always hot water for tea, coffee and some interesting hot chocolate drink, which sadly didn't agree with me.

On day 3, I opened my tent in the morning to quite possibly the most incredible view I've ever seen. We were now above the clouds, so each morning presented a sea of white fluffiness as far as the eye could see with views of another prominent peak in the distance called Meru, piercing through the clouds. Today the plan was to get to Lava Tower, a pretty big rock at 4630m, to then descend to Barranco camp at 3976m. The idea is to experience and see how you cope at the higher altitude to then take a breather a bit lower, to then work your way up again the day after; it's all part of the acclimatisation programme.

Day 4 was a little different in terms of terrain. For the first time you had to actually use your hands to work through the route. Some refer to it as scrambling and everyone seemed to enjoy this new added risk from the much safer, defined path. Today was a fairly short 4 hours of walking with plenty of time to chill and even sleep at the Karanga camp. I sensed that some felt a little bored and would have liked to continue to base camp. I could see why, but I guess if all the group just kept going then some may not have had the proper preparation to take on the last and by far most difficult stage of the trip - base camp to summit! The problem with altitude sickness is that anyone can get it, young, old, healthy, fit, and if you do get it then ultimately it's game over and back down you would go with a guide.

Day 5 was the last push to base camp. Again a fairly easy walk around 3.30 hours. The temperature had dropped by now quite significantly and I was no longer walking in shorts and t-shirt. At the base camp, or Barafu, we were now 4673m and the start of the next and last section was easily visible. After some discussion about when best to head off, we decided on sticking to the original plan for midnight. So, with well over 1000m still to climb through the freezing cold night, and walking on mostly scree for paths, and feeling sleep deprived we embarked for the summit.

It's difficult to explain this kind of experience. It's like nothing I've witnessed before. There isn't really anything nice about it, you're just suffering from the extreme cold and following head torches in the dark, listening to the odd saying by a guide, 'Pole Pole'. I remember checking the time at one point and seeing 3.30am. Still a couple more hours until sunrise...soon it'll be warm...keep going, keep going. By now, it's more the will power that gets you through moments like this. Someone who hasn't walked a mountain before could reach the top of Kilimanjaro by sheer mental endurance. After around 6 hours of slogging it up loose rock, I could see the crater at the top from Stella Point. I could also see Uhuru Peak, my final destination looking very near. The only problem is, it's still freezing even though the sun has risen, and the lack of oxygen makes me move at a snails pace. However, the walk continues along a wide path, passing by some mammoth-looking glaciers. It was an incredible sight to see. Completely surreal and out-of-this world. And then the final push to the top, 5895m reached in just over 7 hours from base camp. After the conventional group photo snaps, I headed down the scree slopes and surprisingly, in under an hour I arrive at my tent in base camp for a much needed rest. After a few hours I headed down with a few others in the group to our next and last camp for the night. That night was actually my best nights sleep on the mountain, my body most likely needed it, and in the morning we headed back Mweka Gate and our final destinations. I even got a chance to see some wild monkeys in the forest before registering for the last time at the hut. There were Kilimanjaro beers all around and many happy and relieved faces.

We then all headed back to a restaurant with a big shop full of souvenirs and merchandise. More beers, food and a finishing ceremony with lots of singing & dancing completed and unique and fulfilling 7 days conquering Mount Kilimanjaro. I believe all of the group said they were glad to have done it, but never again! As for me, I don't believe my work there is finished; one day I'm sure to return and this time, better prepared to take it on again! 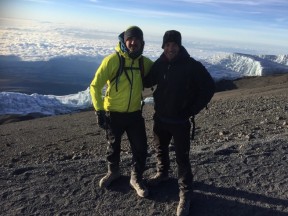